A common trait of a codependent is that they sacrifice their own needs to try and meet the needs of others.

You don’t have to be an addict to suffer from co-dependency.

An addict and a non-addict in a codependent relationship is not unheard of.  If undetected, it can devastate both persons. The root cause of co-dependency lies within the individual, not everyone else.

The co-dependents belief system states the opposite; they often think that they would be happy and everything would be fine if only everyone around them would behave “properly”. 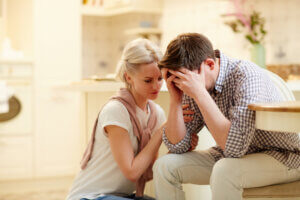 They are unable to see that they are powerless over others actions. Furthermore, co-dependency is often aimed at one particular individual. It is the codependent that suffers the most as time and time again their expectations are not met when they obsessively try to control others.

Co-dependency is a learned behavior which starts at an early age, such as caring for an ill or drug addicted relative. Sadly, one of its roots is sexual or physical abuse from a loved one.

Why Do I Feel Anxious When My Mom Is Not Around?

Why Do I Feel Anxious When My Mom Is Not Around? Anxiety is a feeling of worry, fear, or unease that can be mild or severe. It can be caused by many things, including stress, a traumatic event, or an illness. For some people, anxiety is most pronounced when separated from their loved ones. You are not alone if you…

END_OF_DOCUMENT_TOKEN_TO_BE_REPLACED

How to Deal with Anxiety and the After Symptoms of Having Recovered from Covid-19   Many people in the United States reported having anxiety issues during the pandemic. Another group of people who contracted COVID-19 survived but had some after symptoms caused by the sickness.  For millennia, fear has been a natural and necessary emotion for human survival and evolution….

END_OF_DOCUMENT_TOKEN_TO_BE_REPLACED

Tips for Beating Burnout   Stress is a reality of life, whereas excessive and non-stop stress may take us to the incapacitating emotional condition we know as burnout. Three signs distinguish burnout: fatigue; depersonalization, absence from work; and lack of efficacy, or sentiments of incompetence.   Too much work and deadline anxieties are expected in a job. Everyone could at…

END_OF_DOCUMENT_TOKEN_TO_BE_REPLACED

Fear of Change: Moving to a New Country

Fear of Change and Leaving Your Comfort Zone to Move to a New Country   I was born in the US and grew up in Mexico City, where I lived until thirty-three. I had given thought to the possibility of living in another country; however, I discarded this and was “certain” that I would stay in Mexico for the rest…

END_OF_DOCUMENT_TOKEN_TO_BE_REPLACED

How To Deal with The Manipulation of An Addict When you care about someone who has an addiction, you may find some of their conduct illogical, unsettling and we know this very well here at La Jolla Recovery. Two ordinary threads you can identify in almost all addictions (alcohol, eating, sex, or drugs) are lies and manipulation from the addict….

END_OF_DOCUMENT_TOKEN_TO_BE_REPLACED

How a Simple Life is Better

How a Simple Life is Better   Our world today is a world of consumerism, the message we are constantly hearing is one of “always needing more but never having enough.” Advertisements bombard us making us think and feel that we need to shop more, become more self-indulgent and, to even eat more. For me, this was a very normal…

END_OF_DOCUMENT_TOKEN_TO_BE_REPLACED

Addicts and Manipulation Anyone who has a close friend or relative who has struggled with a substance use disorder knows all too well about the manipulative ways of a person being controlled by their addiction. These behaviors cause extreme heartache and pain and even have the power to separate families and end marriages. In a relationship that has been damaged…

END_OF_DOCUMENT_TOKEN_TO_BE_REPLACED

My Story as a Single Mom

My Story as a Single Mom As a traditional Mexican woman, I never thought divorce was going to be part of my story. The last few years have been a challenging transition period for me, my son, and my now ex-husband.  After many months of dealing with the stress of divorce and handling it to the best of my ability,…

END_OF_DOCUMENT_TOKEN_TO_BE_REPLACED

Looking outside for what’s inside: a dangerous habit

Looking outside for what’s inside: a dangerous habit We often consider traveling great roads in search of what we want, desires, or needs through which we think our happiness passes. So we immersed ourselves with great enthusiasm in the investigation. Thus, we move forward with the hope of finding the solution to what happens to us. But we do not…